Alexander Baraka, General Manager of BMW Motorrad South Africa, says that Bavarian Motorcycles, which is one of the leading dealerships in the BMW Motorrad global network,was an obvious candidate for a brand flagship store.

“Bavarian Motorcycles is the best business blueprint for a BMW Motorrad dealership.Their commitment, business philosophy, attitude and passion for the brand as well as our products has secured them the reputation of being one of the leading dealerships in the BMW Motorrad global network,” he explains.

Business partners Roger Smith (Dealer Principal) and Eric Teixeira, owners of Bavarian Motorcycles, say they were encouraged to make the investment into the brand concept store by several factors.

“We have successfully grown our business from strength to strength over the last ten years and we believe that this is the next frontier to further growth, and to maximise our investment. For our customers, the new premises offers an opportunity for us to showcase all the aspects of the BMW Motorrad brand, which goes beyond engineering excellence, but also lifestyle,” explains Smith.

The launch of the first concept store (Donford Motorrad Cape Town)in 2014 coincided with BMW Motorrad’s new brand positioning campaign“MAKE LIFE A RIDE”. The new Bavarian Motorcycles comes several months after BMW Motorrad announced a new global business strategy with the aim of reaching sales of up to 200,000 units by the year 2020.

The three key principles of the new strategy include:

• Introducing new models below 500cc, starting with the BMW G 310 R, which will be launched in South Africa in 2016,
• Entering new markets/territories such as Asia and South America, and
• Expanding the global BMW Motorrad network from 1,149 to 1,500.

Baraka says the future roll-out of brand concept stores like Bavarian Motorcycles is part of the dealer network expansion. Over the next two years, BMW Motorrad will be rolling out brand flagship stores in Asia, Europe, USA and South America. BMW Motorrad products and services are currently distributed in 95 countries and in 27 of those countries it is the market leader in the premium segment over 500 cc.

“In South Africa, despite a decline in the market of motorcycles above 500 cc, BMW Motorrad has close to 40 percent market share. Our sales and market share are the result of the confidence that customers in our market have in the brand as well as our model line-up,” he explains.

Dimitris Raptis, Head of Region Asia Pacific, China, South Africa and Russia says, “South Africa is one of BMW Motorrad’s key market in one of the fastest growing regions. We are pleased with our footprint in this market.”

In September 2016, BMW Motorrad will introduce the second model of the BMW Heritage world of experience, the new BMW R nineT Scrambler, which was revealed in South Africa for the first time today. 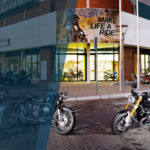