A thoroughbred superbike by design, the highly acclaimed BMW S 1000 RR was originally created as a supersports bike for competing in the 2009 Superbike World Championship. In 2015, BMW Motorrad once again pushed the envelope – by adapting it to become a road-ready sports motorcycle.

The outcome? Adrenalin-charged performance fused with pure riding pleasure!! We take a look at the key features of this incomparable supersports machine.

A body to die for

The absolute quintessence of a powerful superbike, the S 1000 RR is bound to excite, not only because of its technology, but also because of the aesthetics. Every little trimming and detail was purposefully designed to highlight the features of a true RR: ultra-defined, aggressive – and unapologetically arrogant.

BMW Motorrad took a holistic approach to the engineering of the S 1000 RR to ensure every element and component of it is integrated for optimal performance and greater agility. Amongst others, this includes:

It also has an increased torque of 113 Nm at 10,500 rpm – facilitated by a new, advanced exhaust system without the front silencer – plus an enhanced engine set-up. The maximum speed exceeds 200 km/h. Click here to see a video of the S 1000 RR in action.

An absolute pleasure to ride

One of the main factors that make this model so superior is the fact that all that power is packaged in a motorcycle – that is also a pleasure to ride.

Buy a new BMW S 1000 RR or any other BMW motorcycle from Bavarian Motorcycles in the month of August 2016 at prime minus 2%. Plus you will receive an Ultimate Rider Rewards card that will earn you cash back for any future purchases of BMW rider gear, accessories & original BMW service parts.

The Ultimate Rider Rewards Programme are available from Bavarian Motorcycles in Centurion only. Feel free to contact us on 012- 643 1680 on for more information or click here to book a test ride. 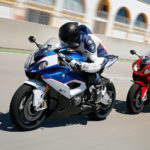